“Hosanna! Blessed is He who comes in the name of the Lord. Blessed is the coming kingdom of our father David. Hosanna in the highest!” 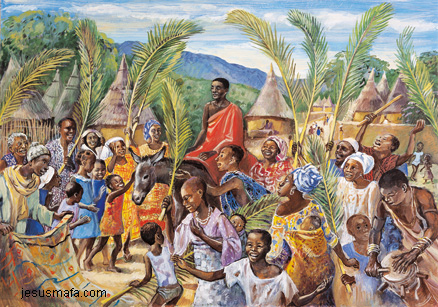 Jesus’ triumphant entry into Jerusalem on a donkey fulfilled the prophecy in Zechariah 9:9. “Hosanna” means to save now. But, save from what? His disciples, His followers, the Pharisees, the bystanders who had come to Jerusalem for Passover…all had different ideas of who Jesus really was. Many expected Him to be their new king, to save them from Roman rule and bring peace.  Most Pharisees saw Him as rule breaker and disrupter. Peter called Him Messiah. Many knew Him as Healer, who set them free from bondage and disease, and many witnessed His miracles.

Still, all had limited understanding of Jesus, yet in less than a week He would be crucified. His resurrection revealed the whole truth to many. With Scripture, we see more clearly the meaning of Jesus’ crucifixion and resurrection. Yet, do we?  Who is Jesus to you and me, in the deepest places of our heart? Who does He say He is?